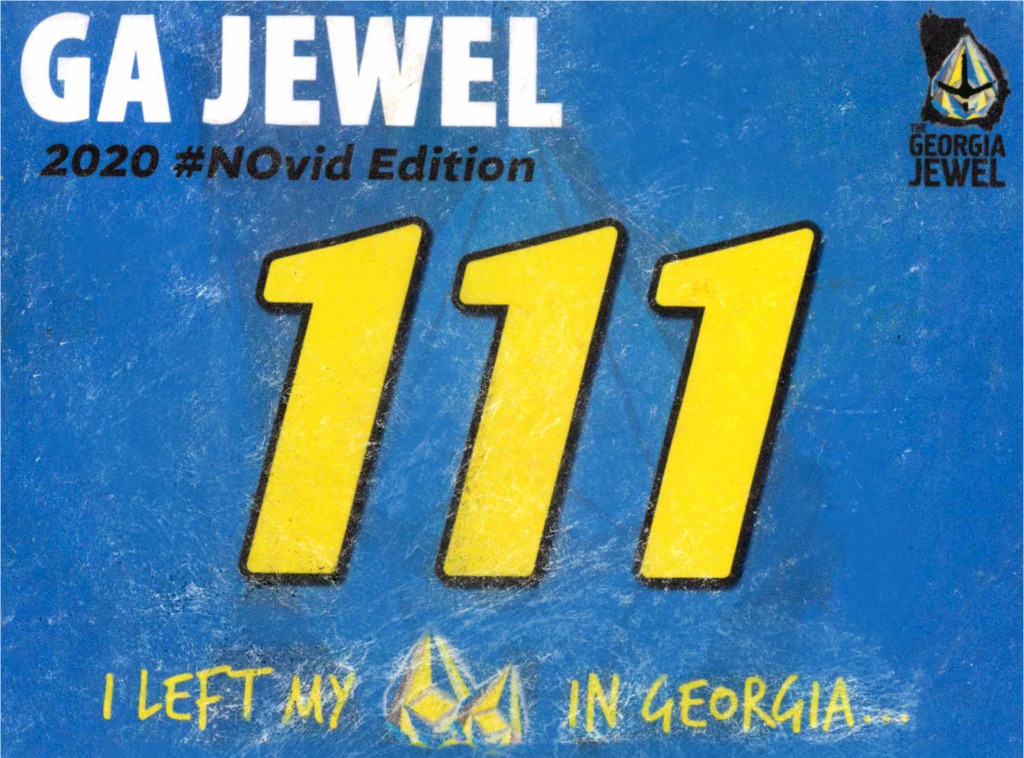 I have unfinished business…this last part of this Series. I am going to just dive right in to explain a lot of the “what” for proper context. The Georgia Jewel is a 100 mile-ultra marathon on The Pinhoti Trail system which encompasses Alabama and Georgia in the southern Appalachian mountains. In September, it is like a lush green jungle.

At times with no more than 4’ of visibility. If you pass someone or someone passes you on the trail, which oftentimes was a single-track, you wouldn’t know until you were nearly on top of the person, or they were on top of you. In addition to the remoteness, the elevation changes of this race are ruthless, over 20,000 feet throughout the 100 miles and the ankle-turning rocks are everywhere!

Needless to say, the terrain is unrelenting…but so am I.

Due to COVID, the starting format had to be altered. Beginning at 4 pm they would start 10 racers every 1 minute for 11 minutes until all 111 of us were gone. Somehow, I ended up in the 4:11 pm race start and because the plan was to start slow, I began the first 5 miles of the race in DEAD LAST. Before the race, my friend Chadd Wright, who had introduced me to this event reminded me that I should start slow, ultra-slow. I heeded his advice. My first challenge; stay calm and confident when I knew I could faster.

Over the next 30 plus hours, I would go to pass 40 different people throughout the 100 miles.

No 100-mile race is complete without a CREW. I had four of the best. Two of which had never seen or been involved in ultra-running and two were well versed in the sport, who would be my Pacers. I came to realize that this is undoubtedly a team event. You move as quickly as your CREW will move. Morale, nutrition, cut-off times, and weather are dictated by your CREW, although some choose to do it on their own.

At mile 15 I rolled my left ankle pretty bad on the trail and went down. This was a pivotal moment for me. It was dark, no one was around, and I had 1 choice; keep moving. I tightened my sneaker and eventually put on gators for added support. The pain dissipated, or should I say, other parts just began to hurt. With a 4 pm start time, you start in daylight, then nightfall happens pretty quickly.

I ran into the darkness of night mostly alone in the solitude of my mind, in nature, and my thoughts. In a world of countless mind-drifting distractions, my mind was singularly focused on the task at hand. This was a big part of my WHY. To engulf me in an unmatched concentration level and simply being in the moment, staying deliberate, and executing the plan. Having only seen my crew at Miles 18 and 36 in the front 50 miles, the first part of the race was very individual, which I was prepared for.

I trained alone, was used to running alone, but the truth is I was not alone. Given the vastness of the area and the format of a spread-out field as nightfall came I would not see another person for nearly six hours but I knew my CREW would be ready when I came in, and they were. Miles 18 and then 36 were in and out. I had momentum and felt good.

NO NEGATIVE THOUGHTS OR CURSES

After 50 miles, my pacers, Ryan and Matt were able to join me, albeit at separate times. Ryan would run from mile 50-57, then Matt from 57-82, and then back to Ryan to finish. The early sunrise helped many people get a second wind; I had never lost my initial flow. I was steady.

My stomach was in good shape, my caloric intake plan was dialed in and overall, I felt great. I had contemplated changing by sneakers and socks at mile 40 but after seeing several runners drop out of the race during this attempted pit stop, by mile 50 I choose to keep my sneakers and socks on the entire race. It worked.

My pacer Matt was dialed in on his mental game plan for me and I felt like I was doing well. There was a hard cut-off time at Aid Station 81.2 at 4 pm.

This was the “RACE” really tightened up.

Everyone said if you make it to this Aid Station before this cut-off, you will finish the race. A lot of thought and effort was put into that and it would be at the Aid Station that Matt would drop and Ryan would take over. I tried not to let such a goal overwhelm me as I knew I had a grueling 18 miles ahead of me in what was the hardest part of the course.

I would see my crew at that last aid station and then not again to the finish line, except for Ryan who would PACE me to the end. Now it was dark again. Light to dark, to light, back to dark. I had been awake for nearly 40 hours and running for nearly 25 of them. Fatigue set in. The last 18 miles we chipped away through an area of the trail referred to as the “Rock Garden”….so many rocks it was hard to get in a rhythm or pace.

By mile 90, I had hit a spot I had never been to. A pain in my feet impossible to describe and a focused silence. This is where it got hard, really hard. Hard to stay in the moment. Hard to not do calculations in my head of the approximate time I would finish or get to the next to last aid station. Agitation set in.

At this point, we were with 2 other runners, which quickly turned to 1. As we rounded mile 95 and the last part of the rock garden we came across a woman who was physically and mentally spent, leaning on a tree and crying her eyes out. The brutal truth of a race against the clock was that we had to keep moving, after giving her some nutrition. That moment stayed with me. I underestimated the challenge of leaving someone like that behind.

Finally, Mt. Baker a steep a steady climb straight up as the last leg of the race. A brutal climb seemingly designed to take out the weak.
We were all in a weakened state.

I can feel it and taste it now. I knew I would finish, no matter what.
Volunteers cheered you on in the cool low 50’s temperatures that were unseasonably chilly. I climbed and made it to the top. From there a ½ mile in and victory.

I gave Ryan some of my gear and dug back to the thoughts of how I visualized my finish every day over the past 8 months. In ultra-running, there is no mass crowd at the finish line. It was nearly midnight on night 2 and I heard the loudspeakers of the Race Director who could only see my headlamp.

I ran as best as I could and started to see the rest of my CREW. Crossing the finish line at 31 hours and 24 minutes with so much joy but so much exhaustion I was unable to celebrate the way I imagined. Pictures, air high-fives, and an overwhelming consideration of what I had just accomplished overtook me. I sat down and was too tired to even eat a cheeseburger or drink a beer. I had so much gas, the hiccups overcame me but none of it mattered. I was battered, battle-tested, and weakened but never stronger than before in my life.

I did exactly what I said I would 8 months earlier. The bar was raised again.

The journey of a challenge that is seemingly impossible when you decide to do it, is the challenge worth taking. Over time of my training the little wins washed more and more self-doubt away; completing a 30k, a 50k, then a 50 miler all during the doubt and unknown of a Pandemic. I learned that the primal spirit lives in all of us and is no better exemplified than the selfless participants of this event. All of which earned the experiences through adversity the pursuit

As I look back and think about this event and the training, people I met, and the impact it had on me, I know that it will FOREVER have a positive IMPACT on me. I hope that my experience, shared may have a positive impact on someone else. Go take that leap and try something that seems crazy (but safe). Every year I put 1 BIG thing on my calendar in my ongoing effort to write my life resume. To experience new things so that I may become a better person. The Georgia Jewel is that event for 2020.

If you read this and believe this has nothing to do with business then you probably should stop reading the #BennettBlog. But if you see the correlation, then I hope you see that you can do more.